A new Pew Research survey conducted from April 14 to May 4 finds most teen students prefer in-person learning to the hybrid or remote options required early in the COVID-19 pandemic.

The survey found that roughly 11 percent of teens reported attending hybrid classes and 8 percent said their schooling was completely remote.

However, the majority of 13 to 17-year-olds (80 percent) attended classes entirely in person in the last month.

“Because distance learning isolates students from each other and reduces sensory input from social interactions, adolescents can have more trouble learning not just from their teachers, but from their peers,” Board-certified psychiatrist and trained psychotherapist Dr. Thomas Adams at Menlo Park Psychiatry & Sleep Medicine, told Healthline.

According to researchers, 65 percent of students preferred in-person instruction, compared to 18 percent who prefer a hybrid model and 9 percent who reported they’d rather learn remotely.

However, the survey found significant differences between ethnic groups.

“The survey findings found that there were differences in the preferences and success rates for teens between online versus in-person learning based on race, socioeconomics, and whether the home had one or more parent involved,” said Dr. Stephanie G. Thompson, LCSW, Lightfully Behavioral Health, Director of Clinical Operations.

Pew researchers said Hispanic teens were more likely than either Black or white teens to say that sometimes they aren’t able to complete homework because they lack reliable computer or internet access.

They are also more likely than white teens to say the same about having to do homework on a cellphone or using public Wi-Fi access.

In total, the survey found that 43 percent of teens living in households earning less than $30,000 reported at least sometimes facing one or more of these challenges to completing homework

These include additional academic and social support, adult mentorship and peer interaction, opportunities to participate in extra-curricular and social activities, “and for some, access to food, electronic devices, and other scholastic supplies,” she said.

About 33 percent of students replied that they weren’t satisfied with their school’s efforts, but most believed the disruption was handled very or somewhat well.

“Adolescents are still developing their capacity to control their impulses, and so have a more difficult time managing work from home than early or mid-life adults,” said Adams.

He emphasized that for teens, “it’s all the more important” to establish environments that can help sustain and cultivate curiosity, focus, and tolerance of uncertainty.

Most surveyed teens expressed “little to no concern” about falling behind in school due to pandemic disruptions. Although 16 percent of them were “extremely or very worried” they might have fallen behind.

Parents expressed greater concern than their children, with about 30 percent of parents reporting they’re extremely or very worried their teen’s education was negatively affected.

“A lot of social interactions are lost or reduced to shallow text messages with distance learning,” said Adams.

He explained that teens are at risk of losing the rich feedback and perspective they can get from others in person, and this raises the risk that they’ll be more alone with unrealistic anxieties, worries, or beliefs.

About 45 percent of teens said they feel closer to their parents or guardians than they did before the pandemic, with fewer reporting the same for friends, extended family, classmates, and teachers.

“It is interesting that a solid 18 percent of teens would prefer a hybrid model now … and only 11 percent now have that,” said Adams.

“This, combined with the data suggesting teens feel closer to their parents, might support arguments for a shift in the general model of public schooling, to allow some students (who benefit most) to do some limited remote learning,” he continued.

Adams admitted that there are circumstances in which teens, and even adults, benefit from remote learning or work.

“Some people suffering from anxiety and particularly phobias much prefer to stay home, when that reduces the likelihood of facing whatever it is that exacerbates the anxiety,” he said.

He pointed out that this is helpful to a limited extent when anxiety is truly unbearable, but most anxiety disorders respond best to someone gradually increasing their exposure to the stressor, over time.

Teens need to interact with others

Thompson said the findings of the Pew Survey aren’t surprising.

“The results explain the preferences the majority of teens have for in-person learning stating socialization as the main factor,” she said.

Thompson explained that developing adolescents have a “distinct need” to interact with others to learn advanced social and emotional skills including communication, and societal norms and rules

“As with any study, one should be aware that there are sampling errors, wording, and practical difficulties, and bias when conducting research utilizing surveys and opinion polls,” she cautioned.

“Kids thrive in an environment that feels predictable, and it can help to calm any anxiety or stress about going to school,” she said.

She recommended that parents not try to solve their children’s problems, but rather ask open-ended questions, provide affirmations and validation, and reflect back on what they’re hearing so that teens know you’re listening to them.

“Let your teen know that it’s normal and okay to be feeling a range of emotions at this time; what they went through was difficult, but talking about it is key to getting through this,” she added.

Fedoroff also said that parents with academic concerns should connect with their child’s school, stay in touch with their teachers about assignments, and even reach out to the school guidance counselor.

Finally, she warned that the pandemic added to a pre-existing teen mental health crisis that we’re only beginning to address.

“If you see concerning or potentially dangerous behaviors in your teen, talk to a professional for guidance,” Fedoroff advised.

A new survey finds most teen students prefer in-person schooling, but there were significant differences in preference according to ethnic group. 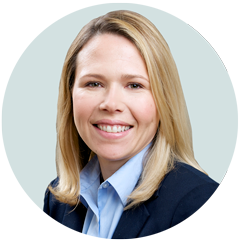